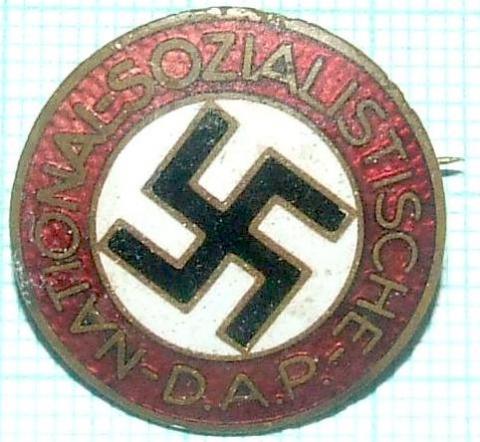 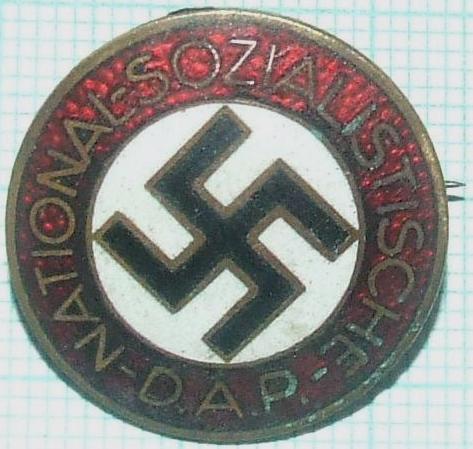 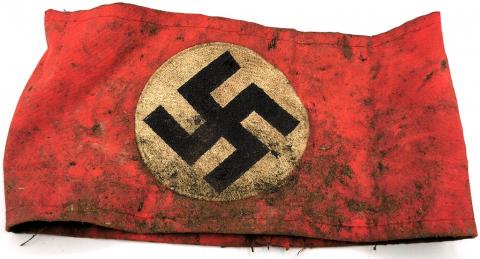 The Nazi Party, officially the National Socialist German Workers' Party (Nationalsozialistische Deutsche Arbeiterpartei or NSDAP), was a far-right political party in Germany active between 1920 and 1945, that created and supported the ideology of Nazism. Its precursor, the German Workers' Party (Deutsche Arbeiterpartei; DAP), existed from 1919 to 1920. The Nazi Party emerged from the German nationalist, racist and populist Freikorps paramilitary culture, which fought against the communist uprisings in post-World War I Germany. The party was created to draw workers away from communism and into völkisch nationalism. Initially, Nazi political strategy focused on anti-big business, anti-bourgeois, and anti-capitalist rhetoric, although this was later downplayed to gain the support of business leaders, and in the 1930s the party's main focus shifted to antisemitic and anti-Marxist themes.

Pseudoscientific racist theories were central to Nazism, expressed in the idea of a "people's community" (Volksgemeinschaft). The party aimed to unite "racially desirable" Germans as national comrades, while excluding those deemed either to be political dissidents, physically or intellectually inferior, or of a foreign race (Fremdvölkische). The Nazis sought to strengthen the Germanic people, the "Aryan master race", through racial purity and eugenics, broad social welfare programs, and a collective subordination of individual rights, which could be sacrificed for the good of the state on behalf of the people. To protect the supposed purity and strength of the Aryan race, the Nazis sought to exterminate Jews, Romani, Poles and most other Slavs, along with the physically and mentally disabled. They disenfranchised and segregated homosexuals, Africans, Jehovah's Witnesses, and political opponents. The persecution reached its climax when the party-controlled German state set in motion the Final Solution—an industrial system of genocide which achieved the murder of around 6 million Jews and millions of other targeted victims, in what has become known as the Holocaust.

Adolf Hitler, the party's leader since 1921, was appointed Chancellor of Germany by President Paul von Hindenburg on 30 January 1933. Hitler rapidly established a totalitarian regime known as the Third Reich. Following the defeat of the Third Reich at the conclusion of World War II in Europe, the party was "declared to be illegal" by the Allied powers, who carried out denazification in the years after the war both in Germany and in territories occupied by Nazi forces. The use of any symbols associated with the party is now outlawed in many European countries, including Germany and Austria. 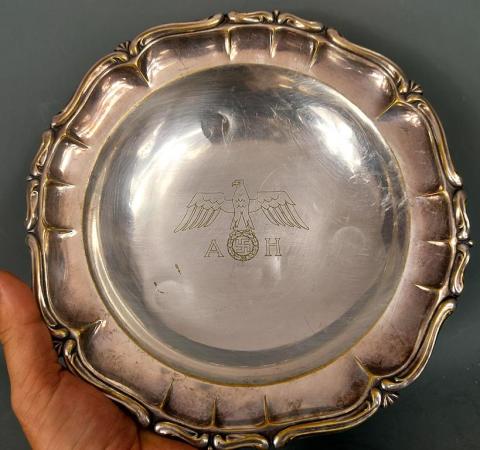 SILVERWARE WITH AH MONOGRAM FROM BERGHOF

FROM THE FAMOUS GIANT TREASURE OF PERSONAL HITLER'S ITEMS FROM HIS HOUSE.
THE PARATROOPERS DIVISION OF THE USA ARMY ARRIVED FIRST TO THIS HOUSE AND THEY CAME BACK WITH A CONTAINER OF STUFF FROM THAT HOUSE.

THIS IS PART OF. 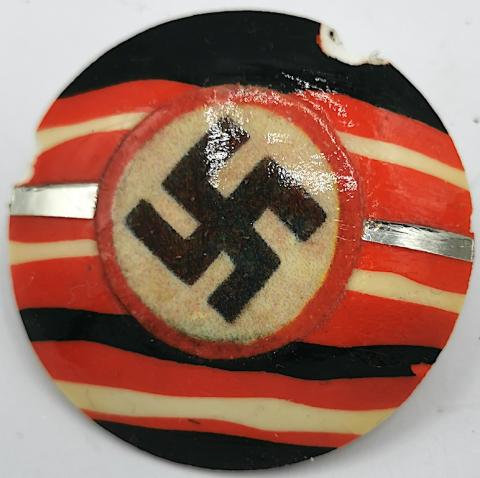 NICE AND MAYBE UNIQUE PIN, GREAT ADDITION TO YOUR COLLECTION!

Adolf Hitler (German: [ˈadɔlf ˈhɪtlɐ] (About this soundlisten); 20 April 1889 – 30 April 1945) was an Austrian-born German politician who was the dictator of Germany from 1933 to 1945. He rose to power as the leader of the Nazi Party,[a] becoming Chancellor in 1933 and then assuming the title of Führer und Reichskanzler in 1934. During his dictatorship from 1933 to 1945, he initiated World War II in Europe by invading Poland on 1 September 1939. He was closely involved in military operations throughout the war and was central to the perpetration of the Holocaust, the genocide of about 6 million Jews and millions of other victims. 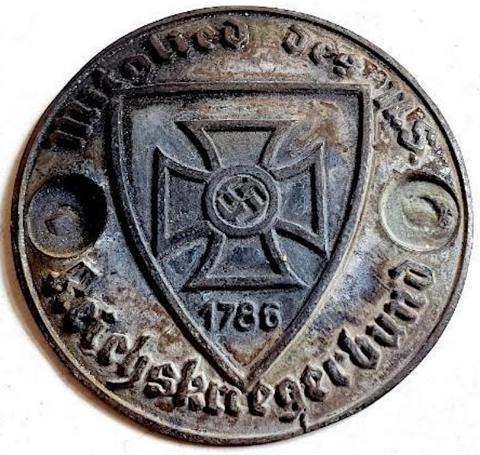 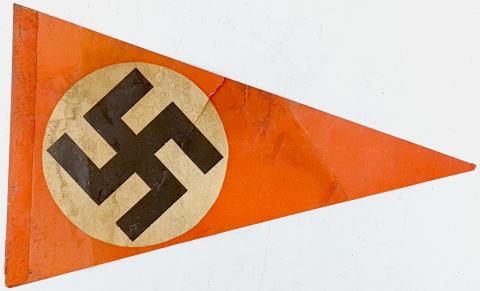 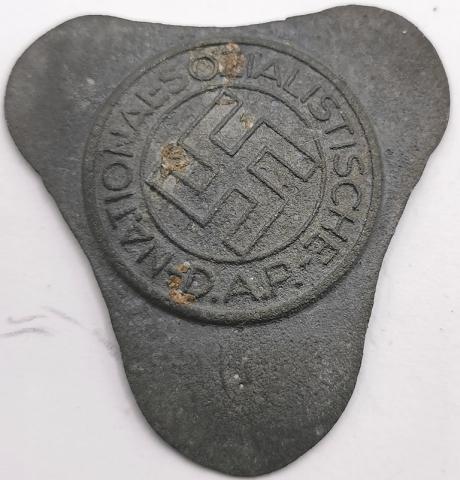 NOT SURE EXACTLY WHERE THIS WAS.
LOOKS LIKE A PLATE THAT WAS REMOVED FROM SOMETHING.
ON THE FRONT A MEMBERSHIP NSDAP PIN AND ON THE BACK THE MAKER RZM SIGNATURE AND CODE.

STILL A NICE ADDITION TO A NSDAP COLLECTION ! 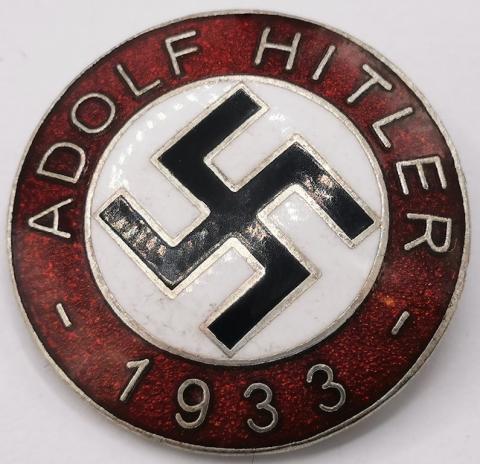 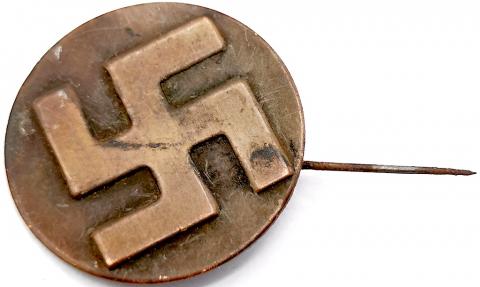