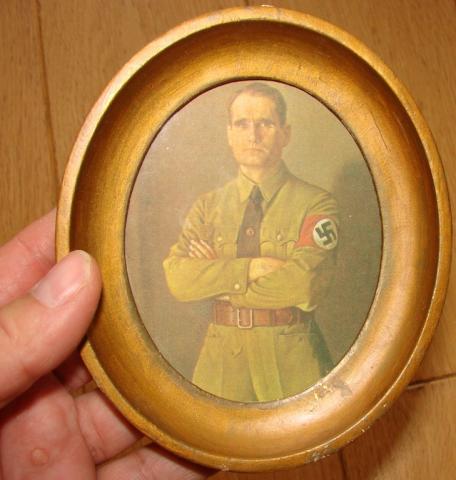 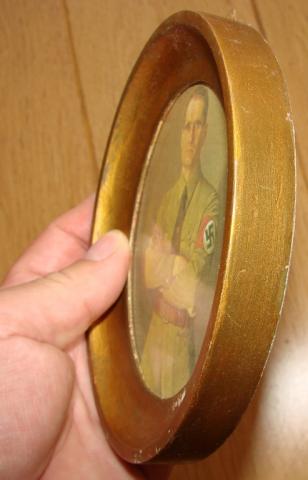 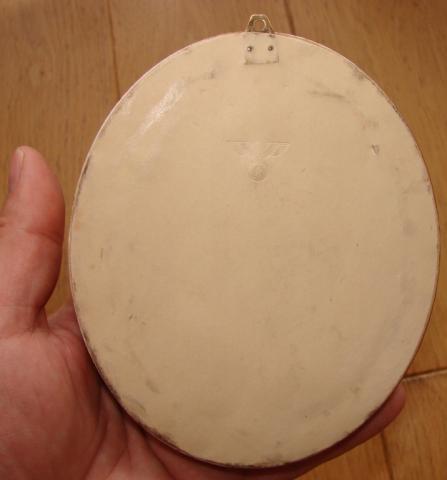 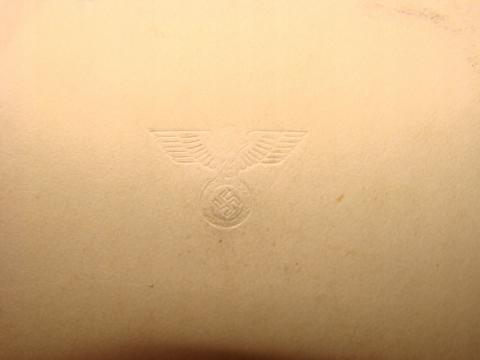 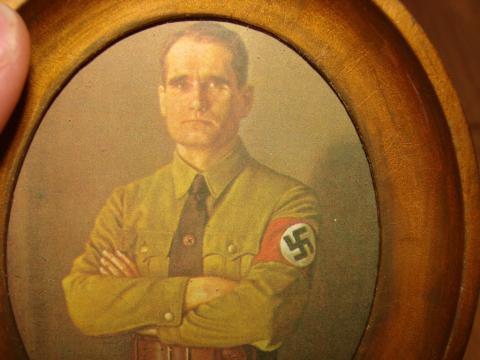 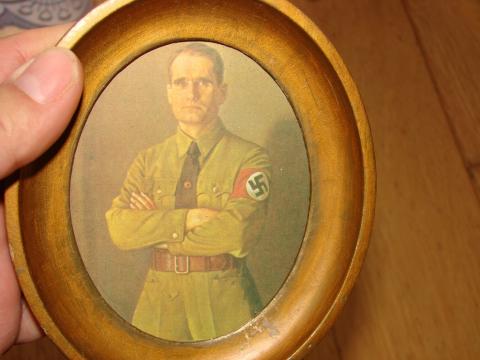 amazing third reich eagle stamp on the back

Rudolf Walter Richard Hess (Heß in German; 26 April 1894 – 17 August 1987) was a German politician and a leading member of the Nazi Party in Nazi Germany. Appointed Deputy Führer to Adolf Hitler in 1933, Hess held that position until 1941, when he flew solo to Scotland in an attempt to negotiate peace with the United Kingdom during World War II. He was taken prisoner and eventually convicted of crimes against peace. He was still serving his life sentence at the time of his suicide in 1987.

Hess enlisted as an infantryman in the Imperial German Army at the outbreak of World War I. He was wounded several times during the war and was awarded the Iron Cross, 2nd Class, in 1915. Shortly before the war ended, Hess enrolled to train as an aviator, but he saw no action in that role. He left the armed forces in December 1918 with the rank of Leutnant der Reserve. In 1919, Hess enrolled in the University of Munich, where he studied geopolitics under Karl Haushofer, a proponent of the concept of Lebensraum ("living space"), which became one of the pillars of Nazi ideology. Hess joined the Nazi Party on 1 July 1920 and was at Hitler's side on 8 November 1923 for the Beer Hall Putsch, a failed Nazi attempt to seize control of the government of Bavaria. While serving a prison sentence for this attempted coup, he assisted Hitler with Mein Kampf, which became a foundation of the political platform of the Nazi Party.

After Hitler became Chancellor in January 1933, Hess was appointed Deputy Führer of the Nazi Party in April. He was elected to the Reichstag in the March elections, was made a Reichsleiter of the Nazi Party in June and in December 1933 he became Minister without Portfolio in Hitler's cabinet. He was also appointed in 1938 to the Cabinet Council and in August 1939 to the Council of Ministers for Defence of the Reich. Hitler decreed on the outbreak of war on 1 September 1939 that Hermann Göring was his official successor, and named Hess as next in line. In addition to appearing on Hitler's behalf at speaking engagements and rallies, Hess signed into law much of the government's legislation, including the Nuremberg Laws of 1935, which stripped the Jews of Germany of their rights in the lead-up to the Holocaust.

On 10 May 1941, Hess made a solo flight to Scotland, where he hoped to arrange peace talks with the Duke of Hamilton, whom he believed to be a prominent opponent of the British government's war policy. The British authorities arrested Hess immediately on his arrival and held him in custody until the end of the war, when he was returned to Germany to stand trial at the 1946 Nuremberg trials of major war criminals. During much of his trial, Hess claimed to be suffering from amnesia, but he later admitted to the court that this had been a ruse. The court convicted him of crimes against peace and of conspiracy with other German leaders to commit crimes. He served a life sentence in Spandau Prison; the Soviet Union blocked repeated attempts by family members and prominent politicians to win his early release. While still in custody as the only prisoner in Spandau, he hanged himself in 1987 at the age of 93. After his death, the prison was demolished to prevent it from becoming a neo-Nazi shrine. 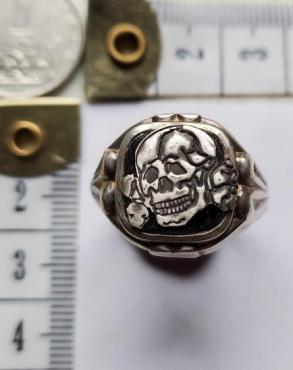 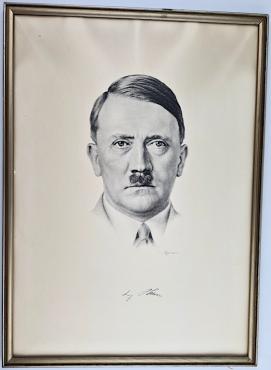 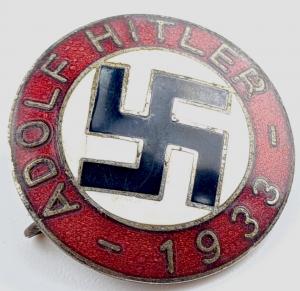