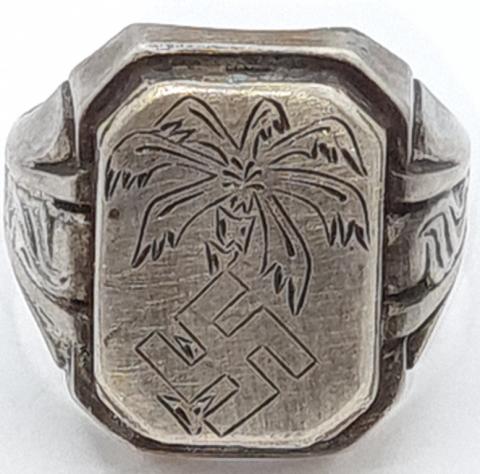 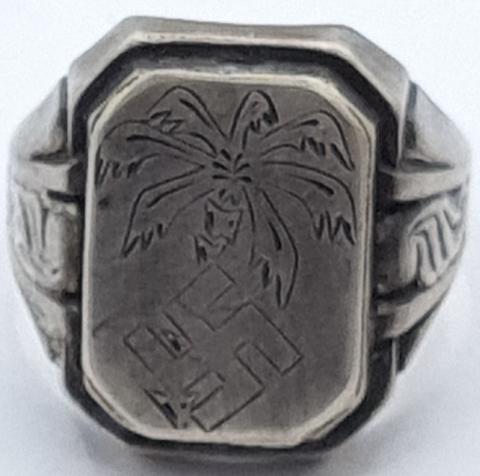 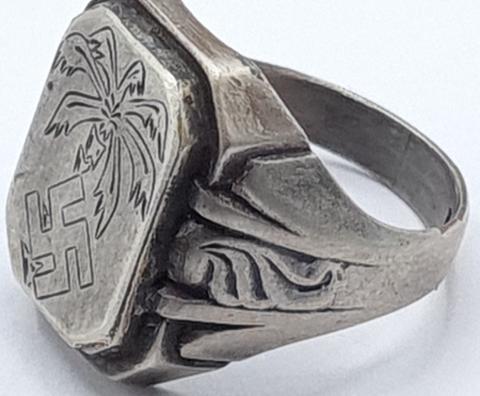 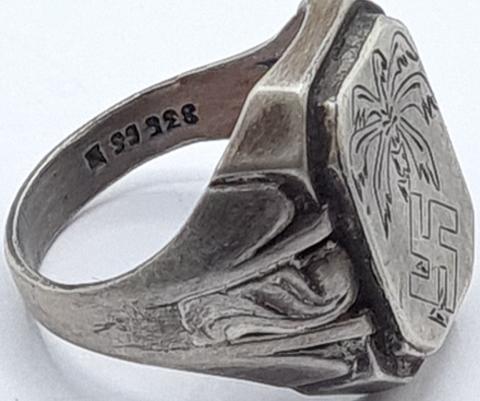 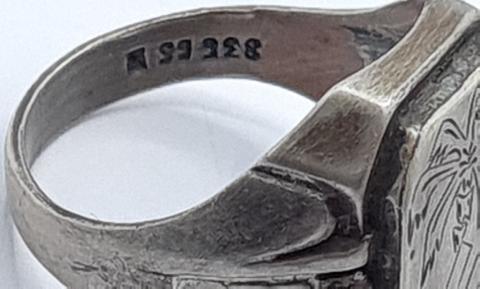 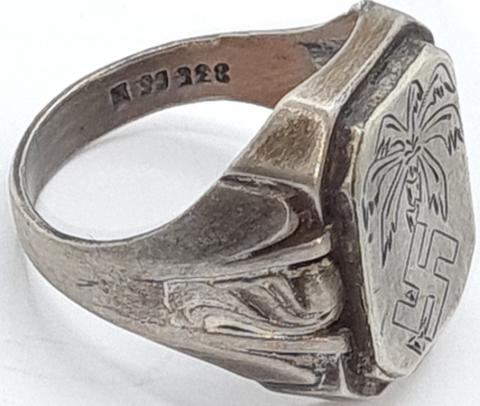 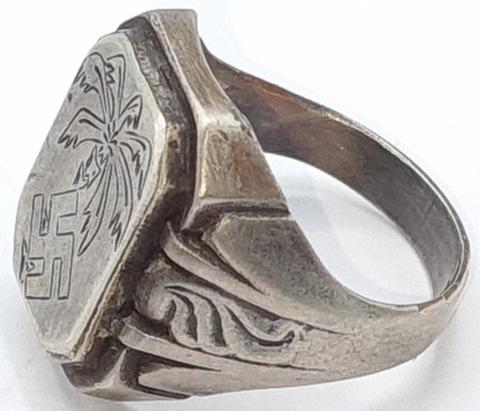 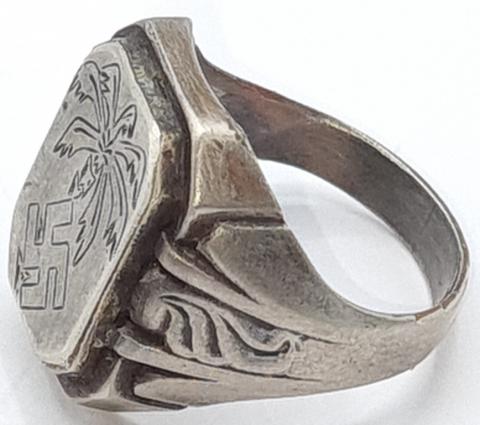 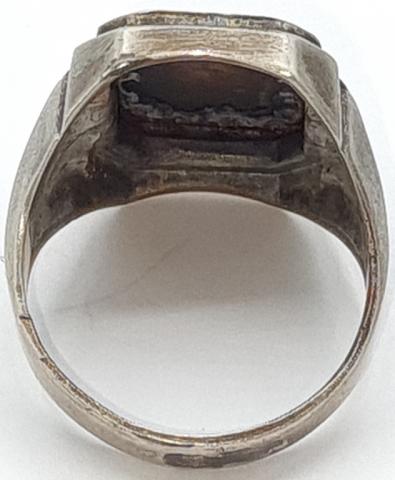 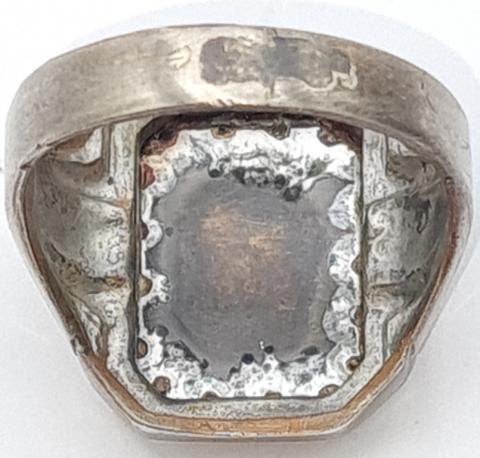 NICE AND UNIQUE HIGH QUALITY SILVER RING MARKS ON THE INSIDE WITH THE ID OF THE PREVIOUS OWNER - SOLDIER...

The North African campaign of the Second World War took place in North Africa from 10 June 1940 to 13 May 1943. It included campaigns fought in the Libyan and Egyptian deserts (Western Desert Campaign, also known as the Desert War) and in Morocco and Algeria (Operation Torch), as well as Tunisia (Tunisia Campaign).

The campaign was fought between the Allies, many of whom had colonial interests in Africa dating from the late 19th century, and the Axis Powers.[12][13] The Allied war effort was dominated by the British Commonwealth and exiles from German-occupied Europe. The United States officially entered the war in December 1941 and began direct military assistance in North Africa on 11 May 1942. Canada provided a small contingent of 201 commissioned officers and 147 non-commissioned officers.

Fighting in North Africa started with the Italian declaration of war on 10 June 1940. On 14 June, the British Army's 11th Hussars (assisted by elements of the 1st Royal Tank Regiment, 1st RTR) crossed the border from Egypt into Libya and captured the Italian Fort Capuzzo. This was followed by an Italian counter-offensive into Egypt and the capture of Sidi Barrani in September and its recapture by the British in December following a British Commonwealth counteroffensive, Operation Compass. During Operation Compass, the Italian 10th Army was destroyed and the German Afrika Korps—commanded by Erwin Rommel, who later became known as "The Desert Fox"—was dispatched to North Africa in February 1941 during Operation Sonnenblume to reinforce Italian forces in order to prevent a complete Axis defeat.

A fluctuating series of battles for control of Libya and regions of Egypt followed, reaching a climax in the Second Battle of El Alamein in October 1942 when British Commonwealth forces under the command of Lieutenant-General Bernard Montgomery inflicted a decisive defeat on Rommel's Afrika Korps and forced its remnants into Tunisia. After the Anglo-American landings (Operation Torch) in North-West Africa in November 1942, and subsequent battles against Vichy France forces (who then changed sides), the Allies encircled several hundred thousand German and Italian personnel in northern Tunisia and finally forced their surrender in May 1943.

Operation Torch in November 1942 was a compromise operation that met the British objective of securing victory in North Africa while allowing American armed forces the opportunity to engage in the fight against Nazi Germany on a limited scale. In addition, as Joseph Stalin, the leader of the Soviet Union, had long been pleading for a second front to be opened to engage the Wehrmacht and relieve pressure on the Red Army, it provided some degree of relief for the Red Army on the Eastern Front by diverting Axis forces to the North African theatre. Over half the German Ju 52 transport planes that were needed to supply the encircled Axis forces at Stalingrad were tied up supplying Axis forces in North Africa.

Information gleaned via British Ultra code-breaking intelligence proved critical to Allied success in North Africa. Victory for the Allies in this campaign immediately led to the Italian Campaign, which culminated in the downfall of the fascist government in Italy and the elimination of Germany's main European ally. 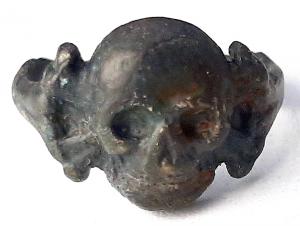 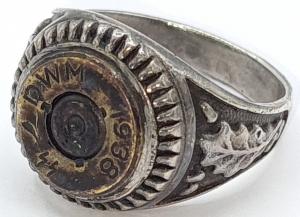 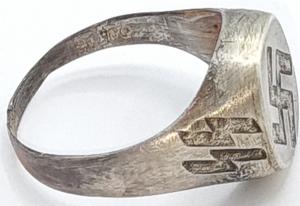 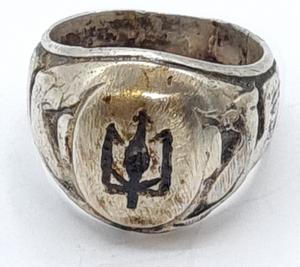